Aga and I arrived fresh from England on Monday afternoon. It seemed amazing and ridiculous that a 6.5 hour flight can transport you so easily and yet so far; as we flew over the dry desert dotted with glinting remote villages and roads carved out between them, it all seemed so different and far away – and not just physically! At the airport everything felt new but still familiar, like putting on an old pair of gloves after a while. And then we were met at the airport by our friend Appapa, and it was like as if we had never left! Arriving in the village was amazing - we had lovely welcomes from all the friends, families and children and many stories to swap.

Since then we have been quite busy, but feel like there's lots more to do!!

o      We ran an initial workshop with a group of about 8 children of various ages to develop ideas. We started with the children taking photos of the playground and the things they liked. 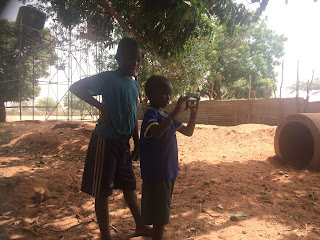 We then went on to explore making spaces to play. 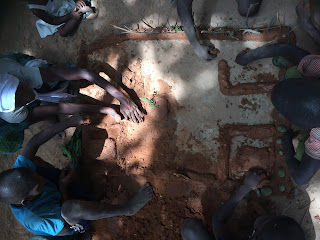 o   This led us on to think about what materials we can try out to facilitate  younger children to make dens. We have seen that chidlen find materials around the site and take these to add to the tunnels. These materials are large, heavy and sometimes unsafe materials (due to sharpness) such as pieces of corrugate, half a metal bin, a large woven panel made of palm leaves, bits of wood… 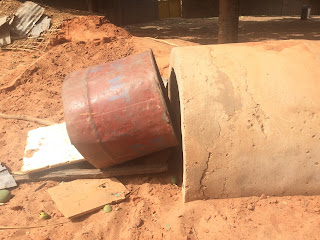 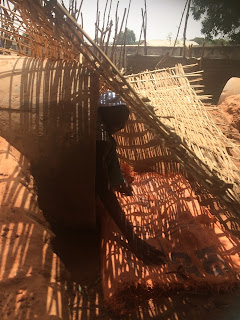 We have started to think about other materials which would be safe and durable and suitable for younger children such as:
§  palm leaves
§  woven baskets
§  Pieces of light wood cut small?
§  Fabric – need to get something cheap
§  String/wool and pegs
§  Coloured cellophane (E really enjoyed trying on my glasses – looking through different materials could be interesting) 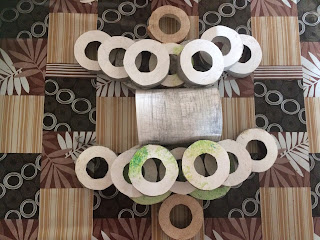 o   The model has helped people like Kodou to understand what we plan to do; she said ”Ah.. now I see what you are planning – there is a place in a school for the deaf (St John’s) where you can see the water going underneath.”  This started us to think about how we can find ways for the water in the rainy season to flow around the structure/shape, rather than trying to make the structure strong and secure enough against the flow of water

·      We have had some informal chats with village members (Abdou, Koudou, Alagie Faye, Sidifor, Ebou Jobe) about the process of including them in the process of planning the playground and had very positive feedback. We have also shown some images to villagers (Sidifor, Maget, Abdou) and got the following feedback.
·      Materials to be strong enough to withstand the harsh climate and the way children use them
·      Secure so they cannot be stolen/taken
·      How to make sure that the youngest children can benefit from the playground as out of school hours older children like to use the site.
·      A fence around it?
Make other spaces/spots for older children to play around the village?
·      They seem to like swings and slides, as well as structures made from tyres.

We have sorted the tyres for the prototype of the tunnel. An assortment of small, medium and larger truck tyres were delivered free to the school on Saturday 15th April (with help from the Gambian Army!)

·      We held a meeting with the Al-Kallow, the school committee and the villagers. Issues that came up included:
o   Fairness: in selecting the volunteers and making sure that all tribes are represented (important especially when it comes to recruitment in December). Also in relation to children doing workshops – keep a list of who does and doesn't do the workshops so the ones who don't do it can do something next time.
o   Issues with the previous project and that because the villagers were not consulted the project cost more than it needed to, as well as people in the village feeling quite annoyed
o   Skill-sharing – people who worked on the project before can share their skills with other people so that the village has greater skill base
o   Issues over whether to do the health centre or teacher’s accommodation as the next project. This led to a big discussion about the priorities for the village being water and health

We have selected volunteers to work on the project – welcome to Sheriff M Nying, Baboucar Senghore, Musa Chorr, Ebou Joof and Ebou Jawara. There are lots of other people in the village who are keen to help us too, with bits and pieces such as finding cardboard boxes and woven baskets!

We also visited St John’s School for the Deaf with Maget on Saturday to see if we could find the tyre construction – but we didn’t. What we did find was an amazing outside space with lots of plants which felt like an oasis from the busy dusty main road outside. Maget took some lemon grass home to plant up, with the idea that it can be eventually used around the nursery school.  Maget was inspired to use hardy plants around the nursery and playground; not only can they add colour, texture and smell, they can help with the dustiness! 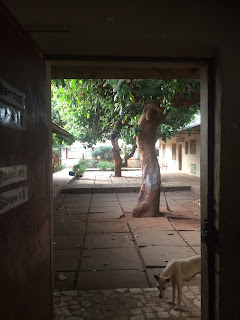 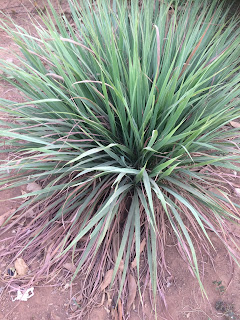 As Li Cham’s metal workshop was nearby we surprised him with a visit and got a promise from him that he weill come and sort out the issues with the roof on the nursery next week  - fingers crossed!!

On Sunday we went on a roadtrip with Colonel Hinna Sambou of the Gambian Army (he is the brother of our friend Appapa). We visited his plots of land where is planning orange orchards and got loads of inspiration for plants, fences and construction materials!!

We have a plan for more workshops, material collection for trials and building the prortotype tunnel for the week coming – so it’s going  to busy!!
on April 17, 2017 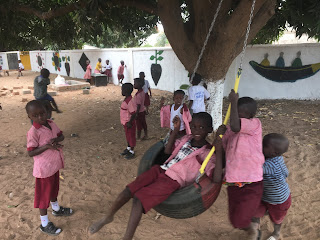